The Medrash relates that prior to the giving of the Torah, there was a discussion as to which mountain would merit the Torah to be given on. Each one had its own advantage: one was the tallest, one was next to the sea, etc. In the end Hashem chose the smallest mountain, Har Sinai, upon which to receive the Torah. This seems strange. If the purpose of giving the Torah on a mountain was to stress the idea of being tall, why pick the smallest one. If the idea was to stress humility, then the Torah should be given in a valley. Furthermore we see that often when we mention the Torah we connect it with Har Sinai: “Halacha MiMoshe MiSinai” (a law given to Moshe at Sinai), or “Moshe Kibel Torah MiSinai” (Moshe received the Torah from Sinai).

The reason for the above is that Sinai showed us that when the Torah was given it united two opposites: Heaven and Earth. This was why the lowest mountain was chosen. On the one hand, a person should be resolute in their attachment and performance of mitzvos, and like we say in the beginning of Shulchan Aruch, strong as lion, not to be embarrassed for what and who we are. At the same time, we need to have the characteristic of humility, as it says that Moshe was "unav mikol odom": he was the humblest of all men. If Mount Sinai was able to fuse these two opposites, how much more so us humans, the highest of all species.

With these thoughts in  mind, let us approach Shavuos by strengthening ourselves - in learning more Torah, and performing more Mitzvos.
Melaveh Malka 29/01/22 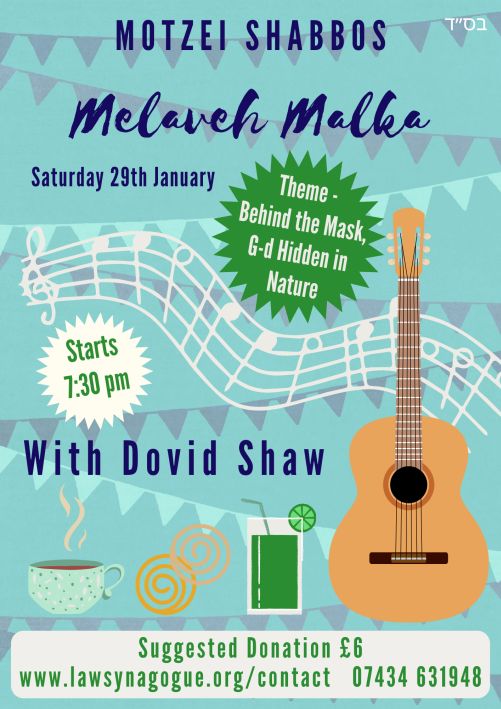 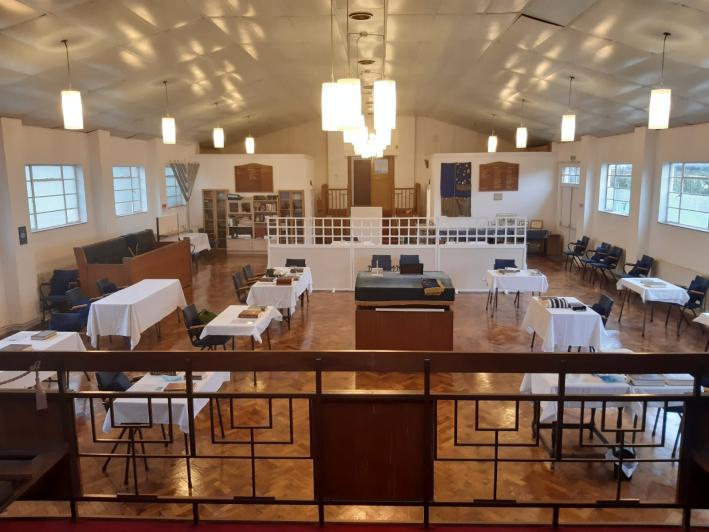 Interior Layout for Distancing
Havdalah with Rev Menasche
Rev Menasche and Chazzan Steve at the Pre-Rosh Hashanah ​Kumzitz
The Chief Rabbi has just sent the following message to all of the communities under his aegis:

Over recent months, during times of unprecedented challenge, I have been inspired by our remarkable Rabbis, Rebbetzens, lay leaders, staff and communities as you maintained the vitality of our Synagogues through regular services, events and programmes. Public health professionals and government officials have recognised your determined commitment to protecting the sanctity of life before all else, in what has been a true Kiddush Hashem.

I have no doubt therefore that, whilst you will share my sense of profound pain, following the Prime Minister’s announcement yesterday, that places of worship must once again close for congregational prayer, you will also share my desire to take whatever further action is necessary to prevent the spread of Covid-19. This directive from the government confers an imperative upon us to close our Synagogues from Thursday.

As I have noted at a previous time, it would be tempting to use the permission granted for Individual Prayer to open our Shuls so that we can daven privately in the presence of others which would certainly be a מעלה (meritorious). However this is significantly outweighed by the potential for לפני עור (placing a stumbling block before the blind), because those present for Individual Prayer might be tempted to daven together in a מנין which would be a clear breach of the law and a ‘חילול ה' - a desecration of Hashem’s name.

It is my fervent prayer that our shuls will very soon be able to safely re-open once again.
May the Almighty bless all of humankind with healing and a speedy end to the Pandemic and all the suffering that it has brought in its wake. 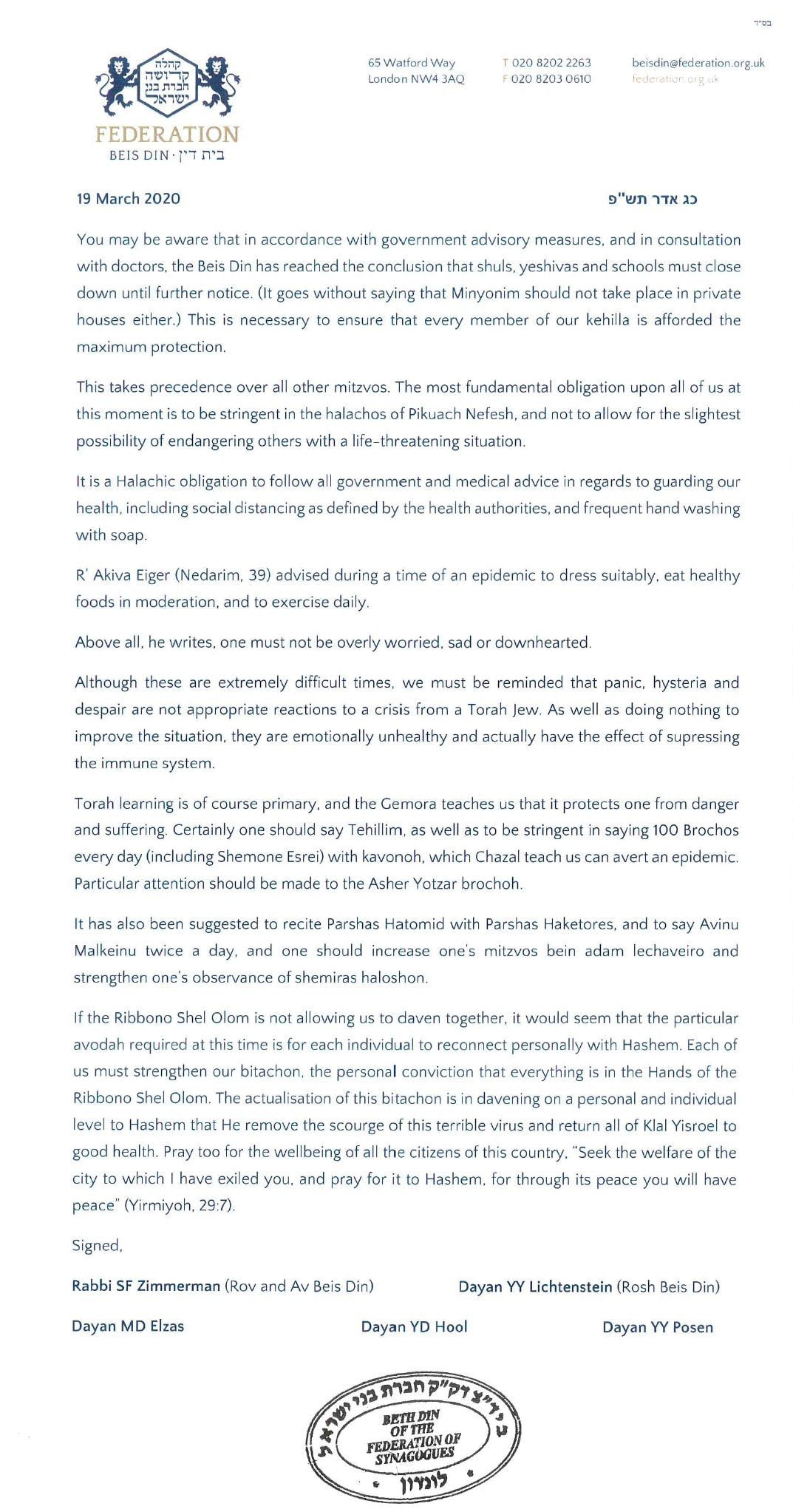 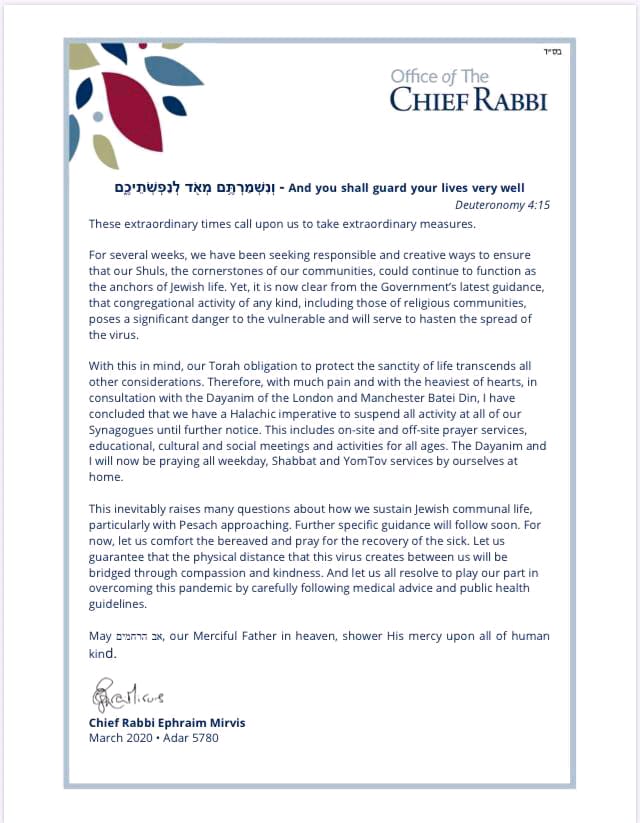