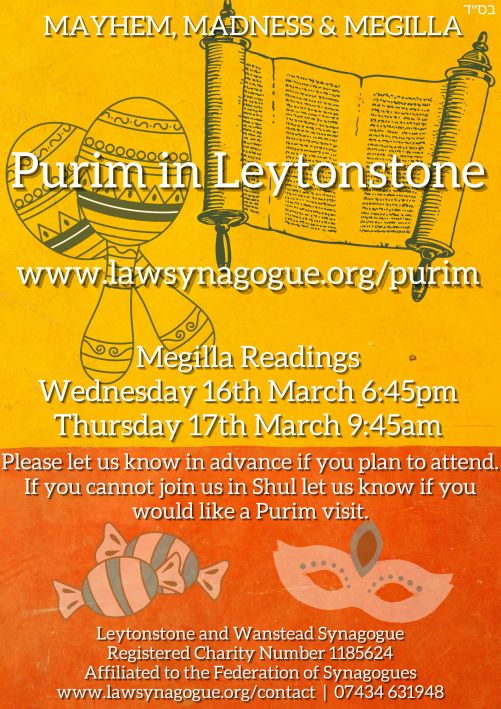 Megilla Readings at the Synagogue
Wednesday 16th March at 6:45pm
Thursday 17th March at 9:45am
Followed by Brunch

The festival of Purim is also known as Purim al Shem Hapur - because of the lottery (pur) which Haman cast in order to decide the Jewish people’s fate. In fact, the word pur is not even a Hebrew word: it is Persian. It seems strange that we call this festival, where we express so much joy and so much simcha, by the Persian word which expresses the intended fate that Haman cast by lot – a lottery to decide in which month he was going to bring about the destruction of the Jewish people.

Another interesting fact is that we do not find Hashem’s name written in the Megilla. Although Megillat Esther is one of the 24 books of the Tanakh, it is the only one where we do not find Hashem's name. There is a clue if we look at where the name Esther comes from. As it says in parashat Vayelech: haster esther es panai - Hashem will conceal his face.

At first glance, the festival of Purim seems connected with the idea of concealment, through the fact that Hashem is hidden. It follows the theme of concealment to consider that, at that time, the Jewish people were very well off, and were very well integrated into society, so much so that it was the only time there was a Jewish queen in a non-Jewish country and Mordechai, also Jewish, was the Prime Minister to the King. And yet they came about this terrible decree to annihilate and wipe out all the Jewish people.

One would have thought that the first step would have been to try and use diplomatic and natural ways to bring about a resolution. In fact, we see the reverse. The first thing that Mordechai and Esther did was to encourage the Jewish people to - number one, fast, and - number two, pray, and - number three, learn more Torah. Only then did Esther and Mordechai put into place the obvious and natural ways of trying to resolve and stop the decree. So we see from here, that the Jewish people are not under the normal rules of nature. Because, first of all, the decree was not a natural decree. And, second of all, the way the resolution and the saving of the Jewish people was brought about was not in a normal way. This is why the festival of Purim is such a joyous and happy festival.

As I write these words, I think about the people in the country of Ukraine, and particularly our Jewish brothers and sisters there who are undergoing such a terrible and difficult time. It's unfathomable that in our times, in the year 2022, that such atrocities, such terrible things should be done to other human beings. It's just mind boggling. So, let us pray. Let us daven through our performance of the mitzvahs and particularly the special mitzvahs which are only done on Purim, where we stress the idea that the Jewish people is all one people by sending presents of food to each other - Mishloach Manos, sending Tzedaka to those who need it - Matanos L’evyonim, and celebrating with our friends and family - a Purim feast. These are all things which accentuate the idea that the Jewish people is one whole body. Let us hope that this Purim we should see miracles in our times, there should be peace restored to Ukraine, and to the whole world. And let us hope we will merit the redemption speedily in our days.
Purim 2021 - Mayhem, Madness and Megilla!
Rabbi Austin Megilla Reading - 26/02/21 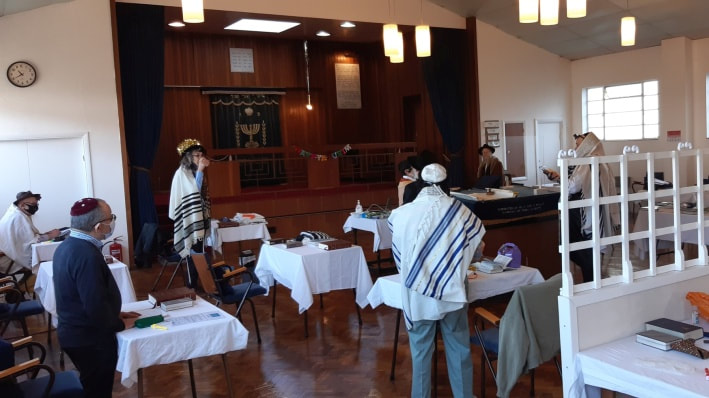 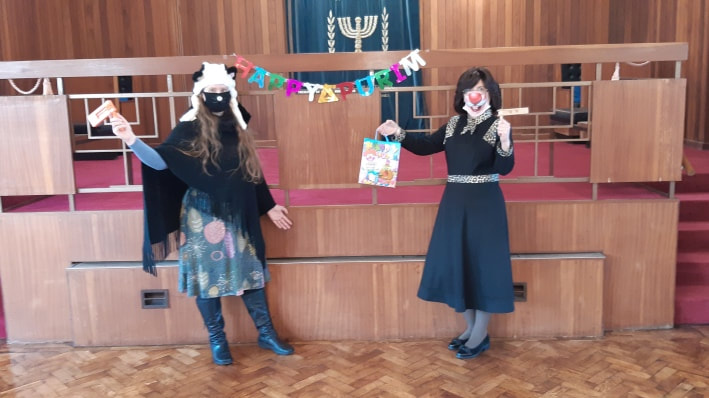 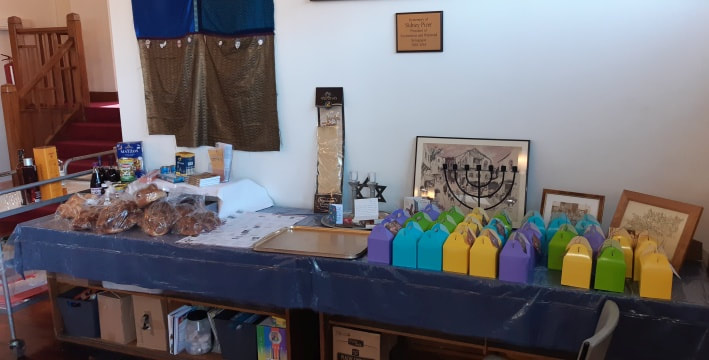 Purim 5781 a message from Rabbi Austin

There is a strong connection between Purim and Shavous, the time we celebrate the giving of the Torah. In the megillah it says (9,23)  ‘Vkibel  hayuhudim eis asher heichelu lasots’, ‘and the Jews accepted what they had already started to do’. The gemora in Megila explains that on Har Sinai we accepted the Torah through an awakening from above, whereas on Purim the recommitment to the Torah was from our ourselves.

The idea of Jewish unity is also mirrored on Purim. At har Sinai the Jewish people camped as one person: on Purim we gathered together in fasting and prayer to advert the decree of Haman, expressing self-sacrifice which was also generated from our own convictions.

The yom tov of Purim is a special time to reinforce our commitment to Torah & mitzvos, and to strengthen our connection with each other. The four special mitzvos we perform are all about being together, and enhancing our ahavas yiroel. I look forward to seeing you over Purim, and to share the joy and friendship of this special day.
Megilla Readings at the Synagogue & Online
Thursday 25th February at 6:30pm
Friday 26th February at 9:45pm 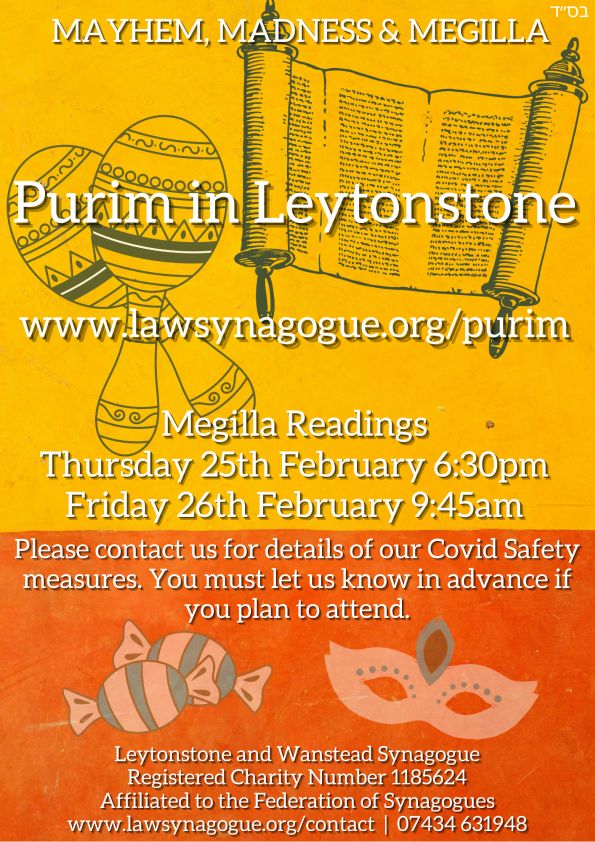 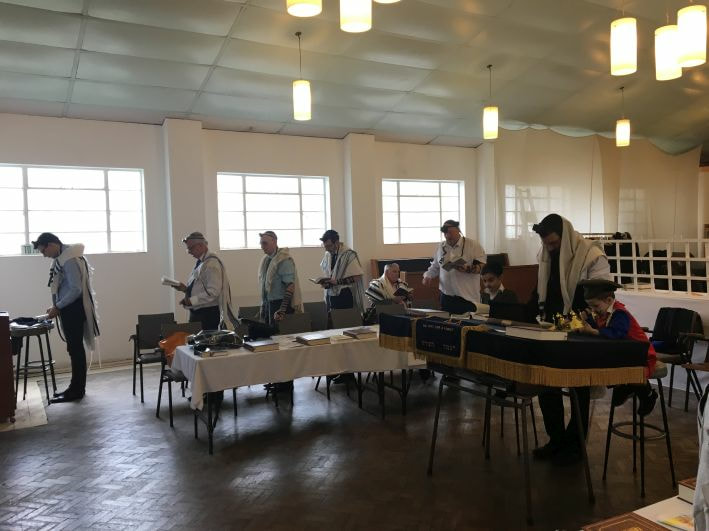 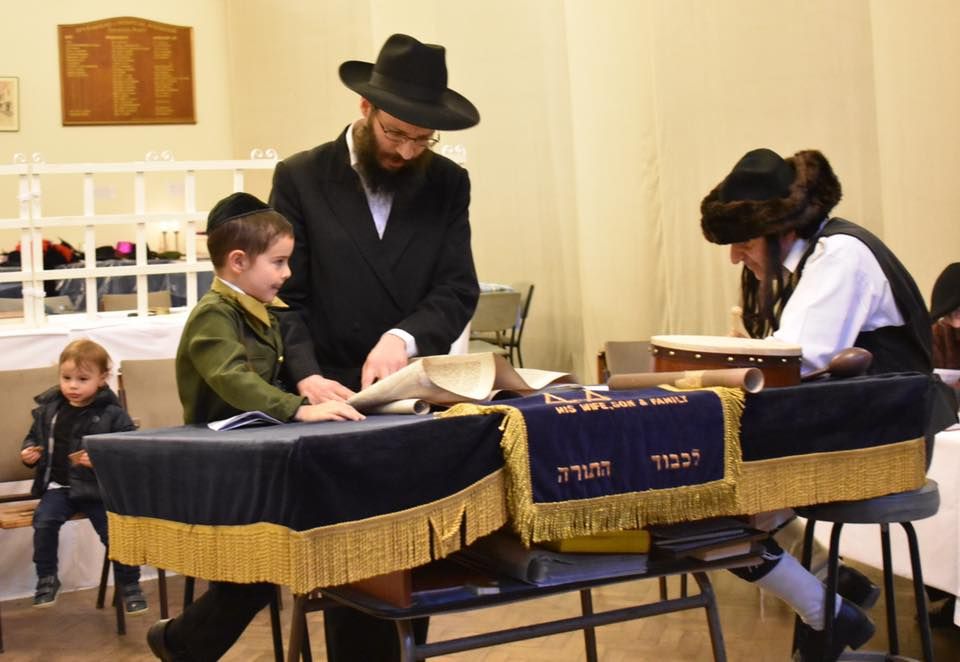 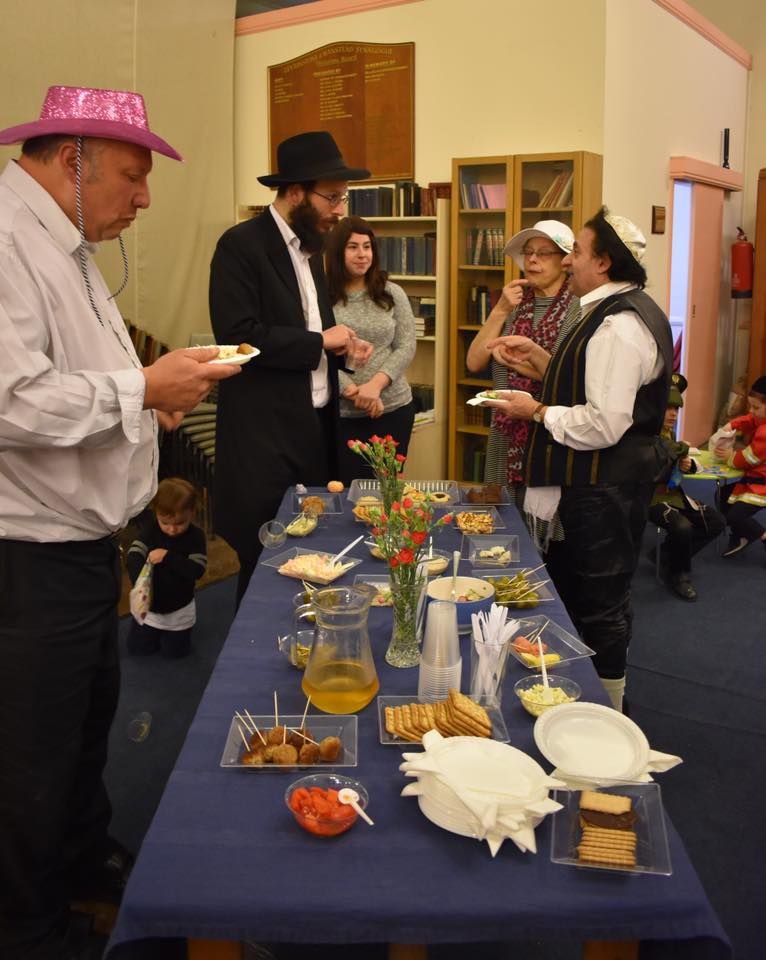 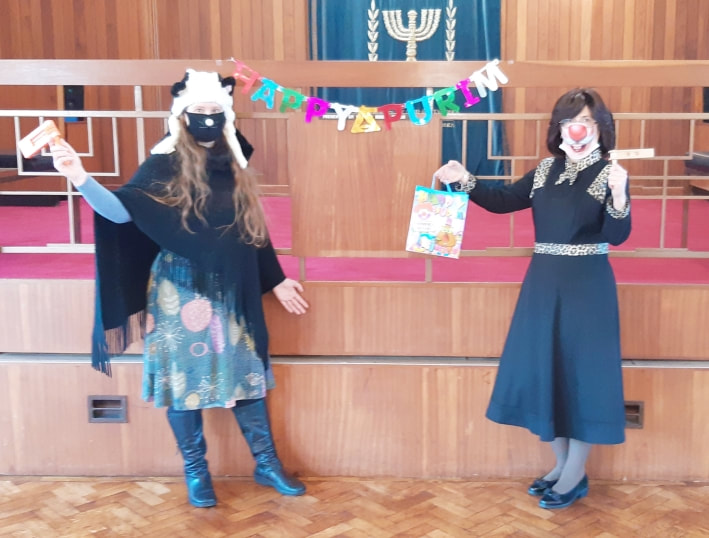 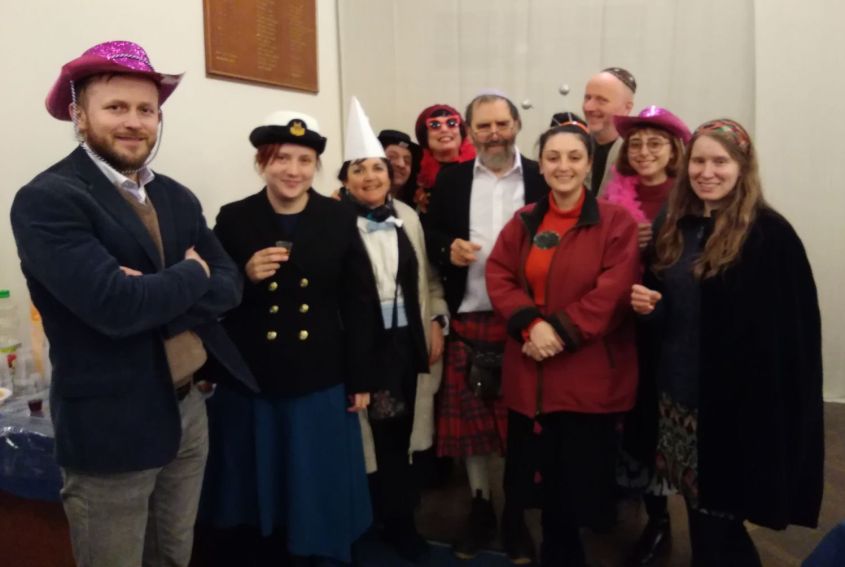 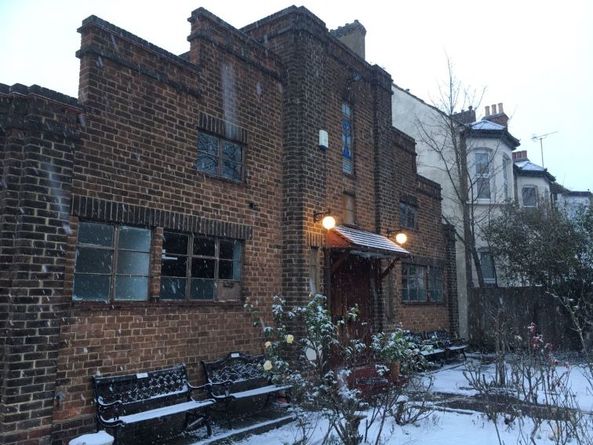 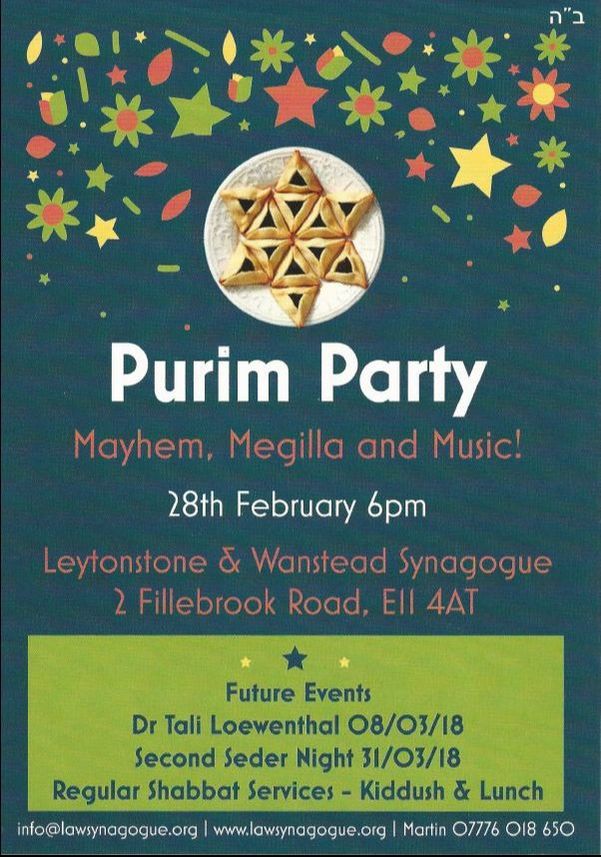